A car battery consists of many ‘cells’. A single cell is quite similar to a rechargeable battery you use at home only bigger. A Tesla Model S with a 85 kWh battery pack  contains 7,104 individual cells.  A BMW i3 with a 21.6 kWh battery has just 96 cells, but its cells are larger than the cells used by Tesla. Together with all wiring and packaging the cells form the battery pack as depicted below. 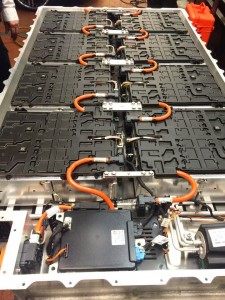 Today’s battery packs are designed with fast charging capability. For example the powertrain of the BMW i3 is rated at 125 kW peak power and 75 kW continuous power while fast charging is done at 50 kW.

The battery pack of a car is never used 100%. The usable capacity of the 21.6 kWh i3 battery pack is around 19 kWh. The reserve of 2.6 kWh is used to ‘cushion’ the impact of charging and discharging. The battery pack automatically cycles between around 5% and 95% of the battery pack. All of this is handled by the Battery Management System (BMS) and completely hidden from the driver.

There are many factors influencing battery life including heat, battery age, duration of keeping a battery fully charged and number of charge – discharge cycles. Research shows that exclusive use of fast chargers hardly affects battery life when tested with the Nissan Leaf MY2012. And other research indicates that fast charging might actually be better for battery life. As a general rule, a battery will last longer when its size increases because fewer charge – discharge cycles are needed for the same mileage.

During fast charging there is continuous communication between the BMS and the fast charger. The BMS instructs the fast charger to set the charging speed. This speed is usually expressed in kilowatts (kW). Charging a car for 1 hour at 50 kW puts 50 kWh into the battery pack. On average an electric car uses 1 kWh to drive 5 km. Tesla also expresses the charge speed in km/hour. So 50 kW equals about 250 km/hour (‘250 km of range charged in 1 hour’).

The voltage is a characteristic of a battery. Most car battery packs today operate at around 400 V when fully charged. But when a battery pack is not fully charged, the voltage will be lower e.g. 325 V. Voltage will gradually increase while charging, so this has a positive effect on the effective charge speed (see the blue line in the graph below showing a fast charge session of a 30 kWh Nissan Leaf). 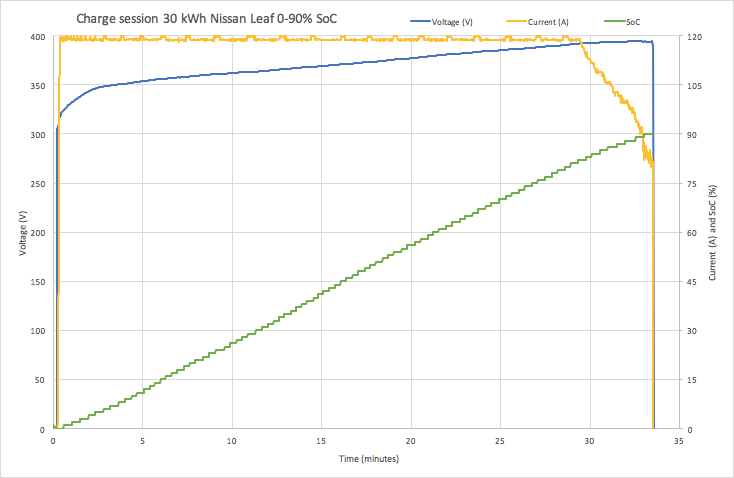 Now let’s take a look at the factors that have an effect on the charge speed other than voltage. There are four main aspects:

Battery pack capacity. In general, a larger battery pack can be charged quicker. So a Tesla Model S with a large 90 kWh battery can be charged quicker than a BMW i3 with a 21 kWh battery. This is also the main reason why most plug-in hybrid electric vehicles (PHEVs) cannot fast charge: their battery packs are simply too small. Most PHEV manufacturers do not include the additional hardware (e.g. extra inlet and wiring) in the car.

State of Charge (SoC). When the battery is almost fully charged the charge speed drops to prevent the battery cells from overheating. Typically at 80-90% SoC the speed drops and charging will slow down further closer to 100% SoC. That is the reason why fast charging is most effective between 0% and 80-90% SoC.

Electric vehicles share a lot of similarities when it comes to the factors that influence charge speed, but the exact impact of each factor differs. For example the 30 kWh Nissan Leaf is able to charge to 90% in the same time as the previous 24 kWh version did. And the BMW i3 can actively heat and cool its battery so temperate will have less impact.

Thank you Roland van der Put for the technical information.

Charting the drive towards electric car dominance on Irish roads irishtimes.com/spons… via @IrishTimes

RT @Easygo_ie Charge point at Dalys Road, Ennis, currently down. We plan to have it repaired tomorrow (Saturday). Thanks for letting us know! pic.twitter.com/JtUx…

Rapid Chargers for your home??? We look forward to visiting the @wall_box stand at the Emove expo in Munich next week - We've already been offered a sneak preview youtube.com/watch?v=…

RT @SEAI_ie A 22kW #EV charging point installed at Hurley’s @SuperValuIRL #Midleton, Co. Cork. This is one of five charging points completed as part of the @Musgraveplc Communities project which was grant supported by our 2018 Better Energy Communities programme. bit.ly/2NW3Gk0 pic.twitter.com/Bqta…

is this really true ??? twitter.com/MostWowF…

I upgraded my charger to this product as we needed something quicker than what we had before. Went for the 32 amp which is a great product, very tidy presentation and easy to use. Chris from Car Charger was very helpful with providing information on its benefits and the install went very well too

Unit fitted well to my home and charges so much faster than the granny lead i used.

I had a 32a charger fitted by the carcharger engineer with a lead from it. So easy connect to my leaf. Engineer showed up within 4 days and had the charger installed before my car was ready. Great service

Had the changeover fitted with my charger because of my electric shower. Works a treat. Very tidy job. Thanks.

I decided to go for the 32 Amp tethered unit including installation to future-proof my home for any EV moving forward – my current EV charges at 16A, but who knows what the future holds.

Chris and Chris were both extremely helpful providing really good advice and reassurance that I was heading down the right path – and Chris did an awesome job of installing the pod on my garage wall – neat and tidy, explained everything I needed to know, cleaned up afterwards!

Highly recommended – just get one!

Charting the drive towards electric car dominance on Irish roads irishtimes.com/sponsored/seai… via @IrishTimes

RT @Easygo_ie Charge point at Dalys Road, Ennis, currently down. We plan to have it repaired tomorrow (Saturday). Thanks for letting us know! pic.twitter.com/JtUxd1O49L

Rapid Chargers for your home??? We look forward to visiting the @wall_box stand at the Emove expo in Munich next week - We've already been offered a sneak preview youtube.com/watch?v=zuEUAn…

We use cookies to ensure that we give you the best experience on our website. If you continue to use this site we will assume that you are happy with it.OkCookie Policy