The number of electric cars in Ireland is pathetic. The Department of Transport published the official Vehicle and Driver Statistics Bulletin for 2015 today. It revealed that there are 1,985,130 private cars on our roads at the end of last year but that only 1,028 of them are electric. That is just 0.05 per cent or 5 five hundredths of one per cent. Can you believe it!

Today’s figures also show that in the last year alone a total of 121,110 new private cars were registered but that only 476 of them were electric. That was just 0.39 per cent of new private cars sold last year. Yet ESB was about to introduce charges which would have acted as a significant disincentive for people to switch to electric.

The original Government target was to have 20 per cent of the cars on our roads electric by 2020. Then it was halved to 10 per cent because clearly they did not have a snowball’s chance in hell of achieving that target. But at the rate they are going we will be lucky if they get to two per cent electric by 2020.

Someone needs to take this issue by the scruff of the neck and get the next Government to wake up and take the issue more seriously. The incentives for people to buy electric cars in Ireland are simply not working. The measures need to be improved substantially.

Serious consideration needs to be given to allowing electric cars drive in Bus Lanes and to be able to park for free on our city streets.

Today’s official statistics show there are only 356 electric cars registered in Dublin. That is certainly nowhere near enough to clog up the bus lanes. And overall, the cost of giving give free parking to such a small population of car drivers would be very small indeed.

Yet two little trinkets like those might just grab the public’s attention and cause people take a closer look at switching to electric.

If something radical is not done, and done soon, Ireland will end up with a massive bill for excessive carbon emissions in our transport sector.

Article posted online about the EV Situation in Ireland. 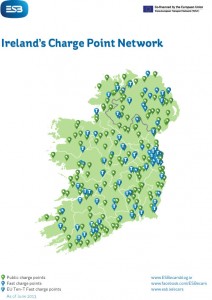 Charting the drive towards electric car dominance on Irish roads irishtimes.com/spons… via @IrishTimes

RT @Easygo_ie Charge point at Dalys Road, Ennis, currently down. We plan to have it repaired tomorrow (Saturday). Thanks for letting us know! pic.twitter.com/JtUx…

Rapid Chargers for your home??? We look forward to visiting the @wall_box stand at the Emove expo in Munich next week - We've already been offered a sneak preview youtube.com/watch?v=…

RT @SEAI_ie A 22kW #EV charging point installed at Hurley’s @SuperValuIRL #Midleton, Co. Cork. This is one of five charging points completed as part of the @Musgraveplc Communities project which was grant supported by our 2018 Better Energy Communities programme. bit.ly/2NW3Gk0 pic.twitter.com/Bqta…

is this really true ??? twitter.com/MostWowF…

I upgraded my charger to this product as we needed something quicker than what we had before. Went for the 32 amp which is a great product, very tidy presentation and easy to use. Chris from Car Charger was very helpful with providing information on its benefits and the install went very well too

Unit fitted well to my home and charges so much faster than the granny lead i used.

I had a 32a charger fitted by the carcharger engineer with a lead from it. So easy connect to my leaf. Engineer showed up within 4 days and had the charger installed before my car was ready. Great service

Had the changeover fitted with my charger because of my electric shower. Works a treat. Very tidy job. Thanks.

I decided to go for the 32 Amp tethered unit including installation to future-proof my home for any EV moving forward – my current EV charges at 16A, but who knows what the future holds.

Chris and Chris were both extremely helpful providing really good advice and reassurance that I was heading down the right path – and Chris did an awesome job of installing the pod on my garage wall – neat and tidy, explained everything I needed to know, cleaned up afterwards!

Highly recommended – just get one!

Charting the drive towards electric car dominance on Irish roads irishtimes.com/sponsored/seai… via @IrishTimes

RT @Easygo_ie Charge point at Dalys Road, Ennis, currently down. We plan to have it repaired tomorrow (Saturday). Thanks for letting us know! pic.twitter.com/JtUxd1O49L

Rapid Chargers for your home??? We look forward to visiting the @wall_box stand at the Emove expo in Munich next week - We've already been offered a sneak preview youtube.com/watch?v=zuEUAn…

We use cookies to ensure that we give you the best experience on our website. If you continue to use this site we will assume that you are happy with it.OkCookie Policy